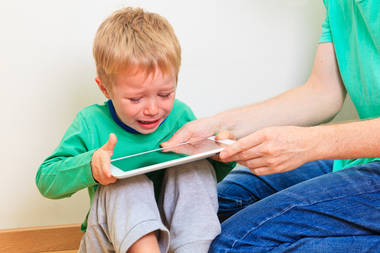 Our world is overrun by technology. While technology has aided the human race with many advancements and conveniences, it also presents with some unfortunate consequences for our children.

Children as young as two can be seen watching a cartoon on a tablet or playing with a cell phone.

Technology has made it convenient to keep our children occupied while we tend to our everyday tasks. While children seem entertained using devices such as tablets, television, cell phones, and computers, many studies show that these devices may have negative effects.

Overuse of electronic devices may cause impairment in the development of a child’s social skills. This includes the ability to make friends in person, take responsibility for actions, display good manners, use polite language, control emotions and temper, follow verbal directions, and develop empathy for others.

A child who excessively uses electronics may become isolated and fail to develop normal communication skills such as conversational skills, listening, and making eye contact.

A child may also be less able to identify social cues and be less attentive. A child may avoid social interaction to spend more time using electronic devices or may use the device to avoid social situations due to social anxiety because of underdeveloped social skills.

Not only can the chronic use of technological devices have a negative impact on the development of social skills, it can also affect a child’s mental health.

According to one study, it was found that teenagers who persistently logged on to Facebook were more likely to present with psychological issues such as mania, paranoia, aggressiveness, antisocial behavior, narcissism, and increased substance use.

Studies have shown that children who regularly use the Internet and play video games exhibit more anxiety and depression.

They can also be more impulsive, moody, and have difficulty maintaining focus.  They may experience social anxiety due to a lack of social skills and are more likely to express feeling bored or unhappy at school.

Studies have also found that technological devices can also have harmful implications on the brain.

In children, the brain is still in the process of development which makes the brain more susceptible to environmental influences.

According to research, playing video games releases dopamine and produces effects that are similar to drug cravings which can result in addiction.

Research has shown that excessive use of electronics can cause gray matter atrophy, the shrinkage or loss of tissue volume.

Volume loss has also been seen in the frontal lobe, the striatum, which is involved in suppression of unacceptable social impulses, and in the insula which is responsible for the development of empathy and the ability to read social cues.

Excessive use of electronic devices has also been found to have physical effects on a child.

One study showed that children who spent more time playing video games and watching television had a higher risk for obesity, sleeping problems, and stomach issues.

Too much TV time may also hinder language acquisition. Television watching is not a creative activity and can result in a lack of imagination.

A child may have difficulty entertaining him or herself without electronic devices. These children are less likely to play outside, may lose interest in toys, show a lack of motivation, and have very few hobbies and interests other than their electronics.

It has also been found that watching too much television discourages children from reading and increases their desire for material goods; thus, decreasing a child’s ability to be patient and to be able to delay gratification.

If you think your child may already be addicted to electronic devices, it’s not too late to start making positive changes in your child’s life.

Make time to spend with each of your children one-on-one. Limit the amount of time that your child spends using electronics or social media. Help build your child’s social skills and other interests.

Plan a family fun night that does not include electronic devices.

Also, be a good model; limit yourself when using electronics in front of your children.