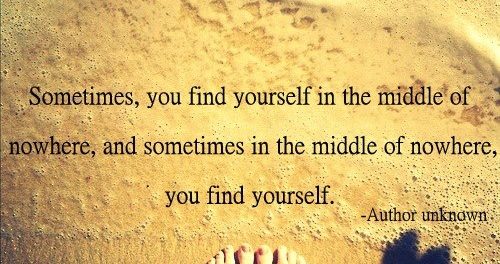 “Man stands in his own shadow and wonders why it’s dark.” ~Zen Proverb

There was once a man who loved to complain and find fault with everyone and everything. Nothing pleased him, so he moved from one town to another, declaring as he left each place:

“I am going to another town, where the people are friendlier.”

A wise man perceived what the problem was, and as the angry man began striding along the dusty road to yet another destination, the wise man compassionately called out:

“Oh brother, moving from place to place does not serve you well. Wherever you go, there you will also find yourself. Your shadow is always with you.”

It took me a long time to understand that, in part, this was my story too. In early 2001, after taking leave of my job and arriving at an ashram in India, I anticipated the months there would be filled with experiences of light, peace, and expansion.

However, within days I was assigned to work with a young woman who could be charming one minute and explosive the next. I was shocked and began pondering:

“How could such an angry person be in this sacred place?”

Finally, after an episode of her screaming, purple with rage in response to the way I had handled a project, I realized it was time to take a deeper look at myself.

Self-reflection took little time to reveal that there was anger, oodles of it, bubbling under the surface of my calm demeanor. Safely kept in check for as long as I could remember, the rarified energy of this meditative environment was revealing my long lost friend, the “shadow.”

For the first time I began to recognize that this woman’s anger belonged to me, and what’s more, what I was seeing was just the tip of the iceberg.

With this acknowledgement, every hidden nuance of anger, in all its glorious forms began revealing itself. Frustration, despair, irritation, disappointment, and depression all came up for air after being hidden underground for so long.

During my time in India, I wrote in my journal, contemplated each experience, and asked the shadow to be revealed in dreams. I was also led to experiment with self-inquiry exercises.

When I gently asked questions to the cold/uncaring qualities, the responses were enlightening. I heard:

“I serve you when you are not clear about your boundaries and take on too much. You must learn to honor your needs and know when to say “No!”

In that moment, I realized that the shadow also contains positive qualities, and in order to be authentic, I needed to take ownership of both positive and negative projections.

Though simple, shadow exercises should not be underestimated. They are very, very powerful. They allow us to tap into energy that has formerly been repressed. Once released, a dynamic force is unleashed, initiating immediate changes in our consciousness and in our lives.

What we are actually doing is re-establishing these qualities and the energy inherent in them, to our psyche. Because of the power of the energy, this work is transformational. It can also be unnerving.

At its very core, the shadow is the collective name given to aspects of ourselves we are not taking ownership of because of fear.

On a subconscious level, we are afraid that if people (or the community) “knew the truth,” we would be judged, reviled, rejected, or worse, thrown out.

As a consequence, we try to hide what we believe is unacceptable. This pattern of behavior begins from the moment we are born. A normal aspect of growing up is that we are taught what constitutes appropriate social behavior and what does not.

However, on a subtle or not so subtle level, we might also learn from our parents or caregivers that “being creative” is unacceptable, or that expressing moderate anger or frustration is going against the norms of society.

When we internalize these messages, we form beliefs about what is “wrong” with us and repress them so deeply they become unconscious. What we do not realize is that these aspects of who we are must find expression, and so we project them onto other people, organizations, or the world at large.

This is how and why the shadow includes both all that we determine we dislike about ourselves and all the wonderful creative potential we are blind to being gifted with.

In addition, when we begin taking ownership of the shadow, we must also understand that this work is not about “becoming someone else,”like the notion of an “improved” version of who we think we are.

Some people become addicted to becoming spiritual athletes, believing that if they meditate for longer and longer periods each day, endure fasts, and chant non-stop, they will attain enlightenment. While these practices are a beneficial and beautiful support for stilling the mind, entering presence, and becoming aware of resistances, they are not “it.”

Indulging in long hours of practices as a way of trying to fundamentally change who we are, is often a camouflage for lack of self-worth or even self-hatred.

Instead, what we must do is wake up to what we are repressing, own what we are

“putting out there,” and reclaim our inherent gifts, skills, and talents.

In support of this we can also ask:

Ultimately, shadow work marks the beginning of the end and is a turning point on the spiritual path.

In essence, we are electing to grow up and stop finding fault with everyone and everything “out there.”

Then, as if by magic, the return to our natural state of unity consciousness begins to break through like the light of a new dawn. And we discover there is no longer a desire to keep running.

We have simply, joyfully, and gratefully come home to who we really are.